This is a quick getting started tutorial for Vagrant to help you get your foot in the door. The official documentation is fantastic at getting you started as well, but this article is geared more towards the absolute beginner and will cut directly to the chase on certain things.

This in no way is a replacement for referencing their documentation, and I encourage anyone who reads this to immediately read the docs after. So, with that being said, read this article if:

Warning! Although still very, very relevant, this article is old! Some things might not work as expected with new Vagrant updates. The quickest, easiest, and most reliable way to get a LAMP stack on your maching is with our new Vagrant Box, Scotch Box.
Heads Up! If you're looking for a tutorial on configuring Vagrant with Chef or Puppet, this article isn't for you. This article also expects you to have a basic understanding of the command line and Git. Lastly, the instructions here are for Mac users, but it should be very similar for both PC and Linux users.

Vagrant is a tool to "Create and configure lightweight, reproducible, and portable development environments."

In laymen terms, this means Vagrant takes all the headache out of setting up a local development environment and replaces it with almost a single config file where you can pick and choose what features you want your server to have. No longer are you stuck using XAMMP, configuring virtual environments manually, or working remotely in your editor via FTP.

What is Vagrant and why should I even care?

Imagine you're developing an app with a team of say 15 people. This app is crazy awesome! It uses the Laravel PHP Framework, Redis and Memcached, Imagemagick and GD PHP Modules, curl, MySQL, PostgreSQL, and even MongoDB. On top of this, Laravel has the specific requirements of needing PHP version 5.3.7 or higher and the MCrypt PHP Extension.

Ideally, you're going to want all 15 people on the team working on this app to have as identical development environemts. Not all the developers on the team are going to have the expertise of Sysops or being a System Admin. Getting the development environments identically setup can be a huge undertaking. On top of that, some people use Mac while others Use Linux or Windows. Before you know it, developers will be throwing computers through walls exhausted from constantly configuring and configuring.

Vagrant manages all this for you so everyone can focus on coding rather than maintaining their development environement.

Then, let's say half-way through the project, it's discovered that you need Beanstalkd installed on the server to start processing queues. Normally, everyone on the team will have to reconfigure their environments to use Beanstalkd hoping that it works. With Vagrant, you'll push an update to the configuration file, and everyone will just need to reload their Vagrant boxes. Boom! Everyone can now start implementing queues in their code. It doesn't matter if they're on Windows, Linux, or a Mac, everyone's development environment remains identical.

When I reference that Vagrant manages all of this for you, that's not completely true. Vagrant works with "Providers" and "Provisioners" to help create these development environments. Providers, such as VirtualBox, VMWare, Amazon AWS, and Digital Ocean, are the services where your virtual environment will be created and hosted. If it be just on your local machine with VirtualBox or VMWare, or alternatively, if it be with Amazon or Digital Ocean to quickly deploy these virtual environments into the cloud.

Provisioners are tools that allow you to quickly configure your server to your exact requirements. These are great to use because they automate the sometimes daunting process of setting up a server through configuration before the server is even created. You can configure nearly everything to be installed on the server. Some examples are PHP, PHP Modules, Apache, Git, Vim, databases, logins, Xdebug, etc. The two most common provisioners used with Vagrant are Puppet and Chef. The provisioners are really neat to use because when you need to build your staging or production environments, you can use these exact same blue prints to ensure you have perfectly synced environments between development, staging, and production.

Enough! Let's get a LAMP stack up and running

This is a step-by-step guide on setting up Vagrant on your Mac. I find that I get incompatibility errors sometimes based on the combined OS, Vagrant version, Chef versions, and even the virtual box version. I am in no way an expert, so these errors might be a lot more minor and fixable than I make them out to be. This also may seem like a lot of points for failure, but when it all works together it is absolutely astounding. Plus, Vagrant support is fantastic and their developers (beast developer?) push fixes and updates all the time. I suggest being exceptionally cautious when upgrading any of the moving parts with Vagrant, especially after you have it working perfectly for you or your organization's purpose. Your development environment is your baby!

The Vagrant installer should automatically add Vagrant to your system's PATH. You should see something similar to the image below and Vagrant is now successfully installed on your system.

Earlier we discussed the Chef provisioner. The example we're going through will use that instead of Puppet. There is a tool called Berkshelf that helps manage Chef's cookbooks (PHP, PHP Modules, Apache, Git, Vim, databases, logins, Xdebug, etc.). The example also uses this. Vagrant or Chef don't require Berkshelf, but it's nice to have in case the Vagrant instance you use or build will take advantage of it. You can install it with the following command on Mac:

The Vagrant Hostmanager plugin lets you add a configuration to Vagrant to automatically update your hostfile and point it to the IP in use. I really enjoy this plugin because it allows you to develop on a pretty URL such as "http://myproject.local" versus "172.22.22.22" or the IP in use.

The Vagrant Omnibus plugin ensures the desired version of Chef is installed. The example we will be using doesn't use this, but I find this plugin super useful for debugging when Chef related issues come up. I believe something like this might be baked right into Vagrant core one day.

Installing Vagrant plugins is a breeze once Vagrant is installed. In your terminal simply type:

You could build your own LAMP Stack and configurations, but for simplicity and the purpose of this tutorial, we'll just be using an already built one by this awesome developer. I've forked and modified the repo to get it working with my version of Vagrant, Mavericks, and VirtualBox.

Navigate to the folder you want your project to be at in your terminal and do:

Next, navigate to the folder and start vagrant:

At this point Vagrant will start building a virtual environment based on the configuration file called "Vagrantfile". If you want for future projects, you can go inside of here and set some useful config options that this stack has. The options I usually change are:

After Vagrant has successfully completed, open up your browser and navigate to http://projectname.local or 172.22.22.22 to connect to your local environment (note that the image URL below is not correct for this tutorial and from an older version): 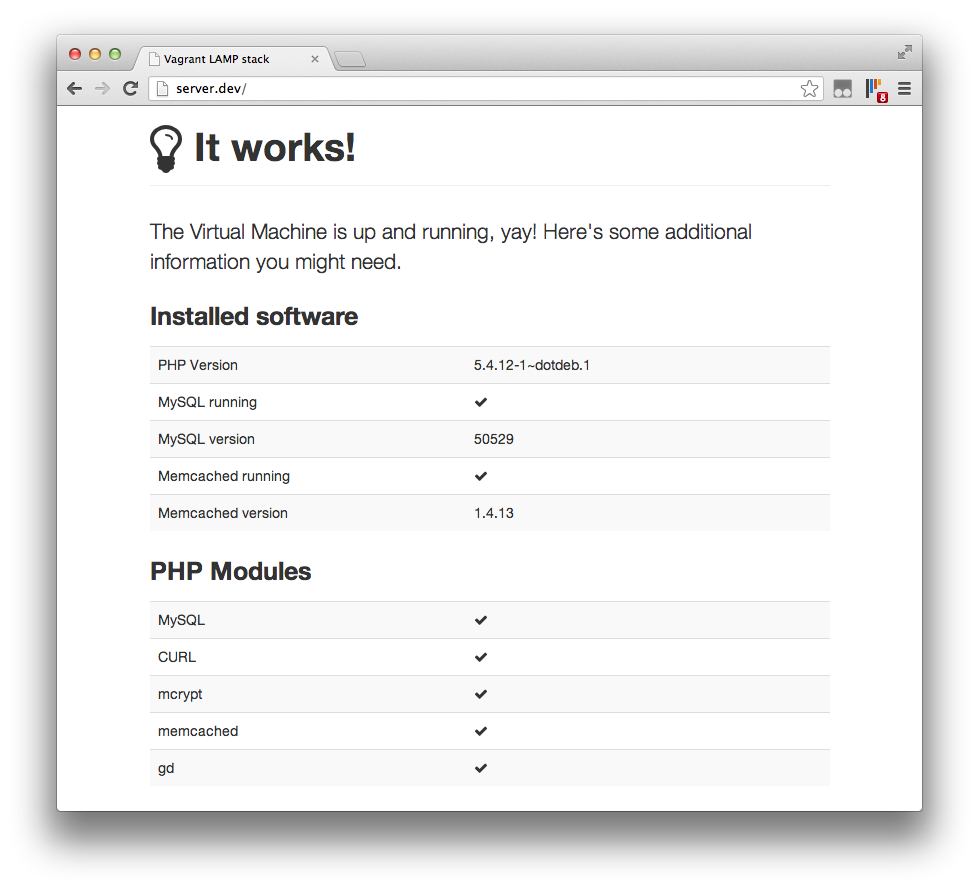 That's it! You're now up and running with Vagrant. To edit files and start developing, just navigate to the public folder and begin coding as you normally would. Any changes made on your computers public folder are automatically shared to the virtual environment.

You can even open up VirtualBox to see the virtual environment that you and Vagrant just created. Here's what mine looked like at the time of writing this:

From the example above, phpMyAdmin will not be installed. You can install phpMyAdmin through the provisoner if you prefer though. I prefer accessing the database through a desktop client better, however. I use both Sequel Pro or Navicat interchangeably. Connecting to the database is easy and the credentials in this example are available in both the Vagrantfile and the example index.php file located in the public folder. To connect with PHP, use these credentials:

Here's what the credentials will look like when connecting to from Sequel Pro:

Depending on thow the Vagrant file was configured, you might not be able to connect this way since it's considered remotely accessing the database. You can still connect with a desktop client by doing a nice SSH port forwaring trick. You'll more about SSH in the next section.

Note that these credentials come directly from running vagrant ssh-config.

There's a ton of commands you can use to talk to Vagrant. For a full list see the official docs here, but I'll go over the more common ones.

vagrant up This is the command you just ran to boot the box up and provision the server based on the configuration file Vagrantfile. I use this for starting as well as resuming my environments.

vagrant suspend Use this command to "pause" your virtual environment. Make sure you do this before shutting down your computer to safely be able to restore the environment later.

Starting, Pausing, and Resuming: To start or restore the environment you can just run vagrant up. The state will be saved and everything should be where you left it off from including your database changes.

vagrant destroy This permanently removes the virtual environment from your machine.

vagrant reload and vagrant reload --provision If your environment suddenly stops working, it's useful to reboot by running this command. If you add the --provision flag, it will reprovision the box as well. This is useful with removing or adding things to the server via Cookbooks or Puppet.

vagrant ssh Anything you edit on your computer in the public folder is automatically shared to the virtual environment without having to SSH in. However, if for whatever reason you need to connect to the virtual server, just run this command.

vagrant ssh-config This lets you see the detailed login credentials of how you could connect to the virtual environment.

That's all it takes to get up and running with Vagrant. Developing locally, having easy database access like this, being able to provision virtual servers from Chef or Puppet configurations, and maintaining a universal development environment for everyone can be extremely beneficial to workflow. One of the added pluses of using these provisioners are that you could technically use them anywhere to copy environments to say a staging or production server. This way you have identical development, staging, and production environments as well.

If you are having problems getting this up and running, here are some other Vagrant LAMP stacks you can try out are:

If you have questions, I'll be happy to help as much as possible. Otherwise, try these resources for support:

If you're dancing circles around this, you'll probably want to go start building and provisioning your own Vagrant boxes that work for you or your organization.

Anyways, I really appreciate anyone who spent the time to read this! I hope you enjoy using Vagrant as much as I do. Goodluck!